A Pattern Language, Christopher Alexander’s book that set out an alternative approach to architecture and planning, contains a series of patterns that deal specifically with education and learning.

This pattern advocates for decentralised learning that can become “congruent with the urban structure itself.” (Alexander 101) Criticism of the current model draws heavily from Illich: rigid, restrictive, passive. The preferred methods of transferring knowledge include apprenticeships with professionals and workgroups, tutorials with specialists, museums, scholarly seminars. Together, these form a civic curriculum, integrated into everyday life. The proposed payment system is through vouchers, raised by community tax (Alexander 102).

43 University as a Marketplace

“Concentrated, cloistered universities, with closed administration policies and rigid procedures which dictate who may teach a course, kill opportunities for learning.” (Alexander 232)

The marketplace analogy describes an academic freedom that prioritizes the choice and openness that is often lost in the large, managerial university. This relies on a physical environment conducive to individuality and freedom of thought: small buildings scattered throughout the city, adjacent to pedestrian paths. Anyone could offer or take a class.

Learning is schools and universities is inherently formalized and abstracted. Helping a professional, tradesperson, or artisan is a more immediate and therefore more effective way of acquiring knowledge. The implication is that places of work are organized in small clusters that reinforce the master-apprentice relationship.

Smaller, independent schools reduce overhead and help reduce the student-teacher ratio. These should be located in three of four rooms of a shopfront. The reduced ratio and integration with the community provide a more enriching environment for children ages 7 to 12.

The following are some examples of these ideas in action. While not linked directly to A Pattern Language, they all emerged at the same time the book was written.

Rochdale College was a co-operative student residence and alternative, student-run college established at the University of Toronto in the 1960s.

The library at Rochdale College: 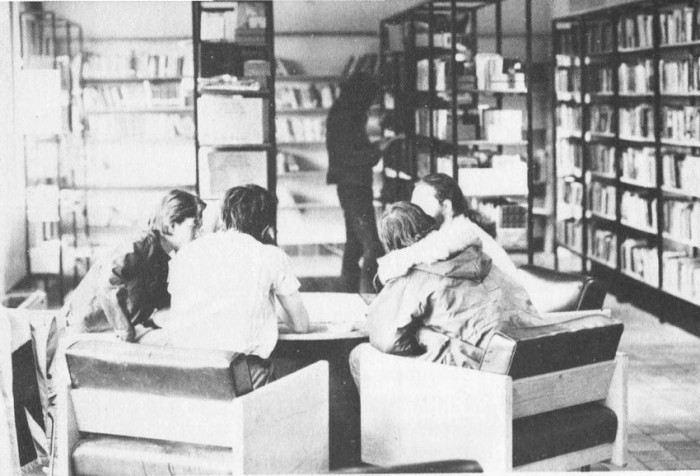 The Open University is geared toward distance learning and part-time students. It has an open entry policy (for most modules). The university has a campus, but has developed a variety of distance learning methods. Most students are mature, non-traditional students.

An example of an Open University video on YouTube: